Melatonin, as a dietary supplement, comes in several strengths, with suggested dosages ranging from 0.3mg to 20 mg. Melatonin is usually produced synthetically from petrochemicals or extracted from the glands of animals (cows or pigs). However, a bio-identical form from plants (vegan) now exists called Herbatonin. Melatonin also comes in immediate-release or sustained-release (also called slow- or time-release). Sustained-release appears to produce less drowsiness and in many instances, the benefits appear to be as good if not better than the immediate-release form.

Melatonin is a naturally occurring hormone produced by the pineal gland, which is secreted into the blood stream. For more than a decade, researchers, clinicians and their patients have debated the benefits, risks, dosing regimens, and length of therapy for hormones introduced into the body. The pineal gland produces between 0.5 mg to 0.8 mg of melatonin from early life to our teen years, with production leveling off at approximately 0.3 mg after that. Production can decline due to diet, lifestyle or simply with age (from about 50 years). This means that the standard suggested dose of 3 mg is ten times what the average adult naturally produces each day. We wouldn’t dose any other hormone at ten times the natural level, so why do we do it with melatonin?

Despite the dosage debate, it is well documented and accepted by the medical community that individuals of any age who are dealing with jet lag, shift work, or challenges to their circadian rhythm, (e.g. seasonal changes), may benefit from melatonin. Positive research into the effects of melatonin on cancer and brain function including memory and autism now means additional prescribing of this hormone by many doctors.

Melatonin is produced by the pineal gland, when the retina at the back of the eye registers darkness. However, melatonin production is reduced and risk of disease potentially increased by exposure to artificial light. Hence recommendations to discontinue use of night-lights, and to reduce time in front of the computer and TV at night, especially since these produce more blue light than red light, which is more detrimental to melatonin production.

Anti-oxidant and anti-plaque effects: Apart from its function as a hormone that can align the body’s circadian rhythm, melatonin also acts as an anti-oxidant, combating the free radicals which can cause oxidative damage to cells. Melatonin, uniquely, can cross the blood- brain barrier. Usually the blood-brain barrier is non-porous, inhibiting substances from coming in contact with our precious brain tissue.

Most substances that we consume, including common antioxidants, do not cross this barrier. Yet, nature in its wisdom has provided protective effects for our brain through melatonin, which may in part explain its benefits in brains whose function is compromised. For example, research groups have demonstrated the correlation between melatonin deficiency and conditions such as ADD and ADHD.

We also know that oxidative stress is a leading factor in age-related brain dysfunction in diseases such as schizophrenia and Parkinson’s. Research has also demonstrated the beneficial anti-plaque effects of melatonin in patients with Alzheimer’s. These anti-plaque and antioxidant effects, together with further identified benefits, make melatonin an attractive potential solution for conditions that adversely affect the brain.

Mitochondrial protection: Melatonin is selectively taken up by mitochondrial membranes, a function not shared by other anti-oxidants. Mitochondria, the cellular source of energy, can be damaged by a plethora of factors, with mitochondrial dysfunction contributing to conditions such as Parkinson’s, Alzheimer’s, and Huntington’s disease. The sensitive nature of mitochondrial membranes means they may be protected from the use of melatonin supplements.

Because of the serious nature of these conditions, doctors are often careful to suggest natural products. However, in many instances these patients have already tried or use standard medications and the addition of melatonin in low 0.3 mg doses, which is unlikely to interfere with the drug regimen, may be worthy of consideration.

Anti-inflammatory, immune-modulation and more: In a study of subjects who ran a 50 km (31 mile) course, those who took melatonin had reduced levels of stress markers, emphasizing not only antioxidant but anti-inflammatory effects, potentially reducing the risk of heart attacks and strokes in such endurance athletes.

Patients with elevated body weight, blood pressure and cholesterol, have shown improvement in LDL cholesterol (“bad” cholesterol) and reduced blood pressure after just two months of melatonin use. Even more interesting is the fact that these improvements were seen in patients who had not responded to a three month program of diet and exercise modification.

Melatonin has positive effects on the immune system, demonstrating some anti-carcinogenic properties. In 1991, the pioneering work of Dr. Paolo Lissoni from Italy demonstrated that high doses of melatonin were effective in arresting tumor growth and improving quality of life markers. Subsequent studies have confirmed his findings.

Other studies have looked at how shift work, particularly that including night work, may increase the risk of cancer and may aggravate gastrointestinal and cardiovascular disease, complicate pregnancy, and interfere with drug therapy

We now know, that when using hormones, the lowest effective dose is appropriate and that larger doses do not always offer more benefits.

Some doctors also believe that high doses, prescribed long-term can negatively impact the body’s own production of melatonin, leading to dependency. Vivid dreams, particularly alarming if the patient is a child, have been reported with high doses or long-term use.

The pharmacologic dose (3 mg), like the lowest dose (0.1 mg), also improved sleep; however, it induced low body temperature and caused melatonin levels to remain high into the daylight hours. While we need to lower body temperature to sleep well, doing so excessively can disrupt sleep. Melatonin’s ability to lower body temperature may give significant clues to the appropriate dosage. For example, an individual may notice a need for more covers, which together with excessive movement, may suggest too much melatonin at night.

Researchers also evaluated the 0.3 mg dose in children who suffer from Angelman’s Syndrome (AS), a rare genetic condition in which sleep is difficult to maintain and there are other symptoms including severe mental retardation. They determined that the 0.3 mg dose effectively elevated blood levels, decreased restlessness during the night, and children went to bed more willingly. What is profoundly interesting is that many of these children were taking medications which are known to deplete melatonin and AS children are thought to produce less melatonin than developmentally normal children, possibly due to their poorly formed pineal glands. These subjects likely have the most need for melatonin yet only 0.3 mg was sufficient to see clinically relevant improvements.

Dr. Paolo Lissoni’s cancer research demonstrated that 20 mg was effective in arresting tumor growth and improving quality of life markers. Subsequent studies have all mirrored this dose; however, it is important to note that 20 mg was a calculated dose. Little research to date has been conducted on lower dosages to determine if they are as effective in cancer patients or if the physiological dose of 0.3 mg can be used for prevention.

In 2002 Dr. Alfred J. Lewy and colleagues found that physiologic doses (0.5 mg) may offer benefits that pharmacologic doses (20 mg) do not. These researchers observed the effects of doses of melatonin in blind humans who often have disrupted circadian rhythms due to the pineal gland not receiving appropriate light stimulation from the retina.

The debate continues with uncertainty about “How much melatonin is too much?”

Hormone production and timing of secretion has many variables. In addition, bioavailability of the form or product used can play a part. Many practitioners, who have regularly used higher dosages of 1- 3 mg find that when they switch forms, for example, to plant-based Herbatonin from synthetic or animal-based product, lower dosages are just as effective.

Melatonin is quickly broken down by the body and a personalized dose should therefore be given daily. For example, if an individual feels best on 1 mg melatonin, giving 3 mg every third day is not a viable alternative. Off-the-shelf products containing 3-5 mg are often chosen because they are seen as a good value, but getting more medicine for your dollar is not always better value. The lowest effective dose of any product, natural or prescription is always the most prudent choice.

The prescribing of melatonin for children is now well accepted, with poor sleep, attention-deficit disorder, and autism spectrum disorder all studied and reviewed, with effectiveness and safety confirmed. However, studies range widely across dosing levels and period of use. It is also important to note, as mentioned previously, that healthy children generally produce three times the level of melatonin that adults do, and that in many cases removing light (night light, computer, TV) can be enough to trigger their own production. Because of this some authorities suggest limiting melatonin to 0.3 mg in children. “The dose of melatonin applicable to each patient must vary according to multiple factors such as the child’s medical problems, the severity and type of sleep problems, or the associated neurological pathology.”

Indiscriminate dosing may lead to unnecessary dependence. Again, it is worth repeating that the least effective dose is the best dose.

Melatonin use has been studied in neonatal care with breast milk content of melatonin shown to vary during the day. This is an issue for the lactating mother who is pumping and storing her milk to be aware of and yet another reason that breast is superior to formula.

Finally, to underscore the discussion of dosing in both pediatrics and adults, it is important to understand that melatonin is metabolized via the liver. Slow metabolism by the relevant liver enzymes has clinical application. Therefore, if an individual finds decreased the effectiveness of melatonin over time, the dose should not be increased, but rather decreased.

It is best to speak with an authority on melatonin when deciding on its use. Melatonin has some strong clinically valid health benefits for specific conditions; however, dosing and form play a critical part in how effective they will be for you. Every person is different and that is why working with your primary health practitioner, who has a strong historical understanding of your health and what other medications you are taking is key. A number of conditions and medications have been shown to depress melatonin levels in the blood and your solution could be simply to stop or change from those particular options. While your doctor or pharmacist may be a good source of information regarding these interactions, even they may not be able to keep up with the volume of information so if a suggestion doesn’t sound right, make sure you also get a second opinion from an expert in melatonin forms and dosages.

Our medical team is always available to answer any of your questions and work with your primary healthcare practitioner.

About the Author: Dr. Corey Schuler is Symphony Natural Health's National Educator. Dr. Schuler has a master’s degree in clinical nutrition and botanical medicine, is a chiropractor, licensed nutritionist and holds certification in acupuncture, kinesiology, holistic and functional medicine. 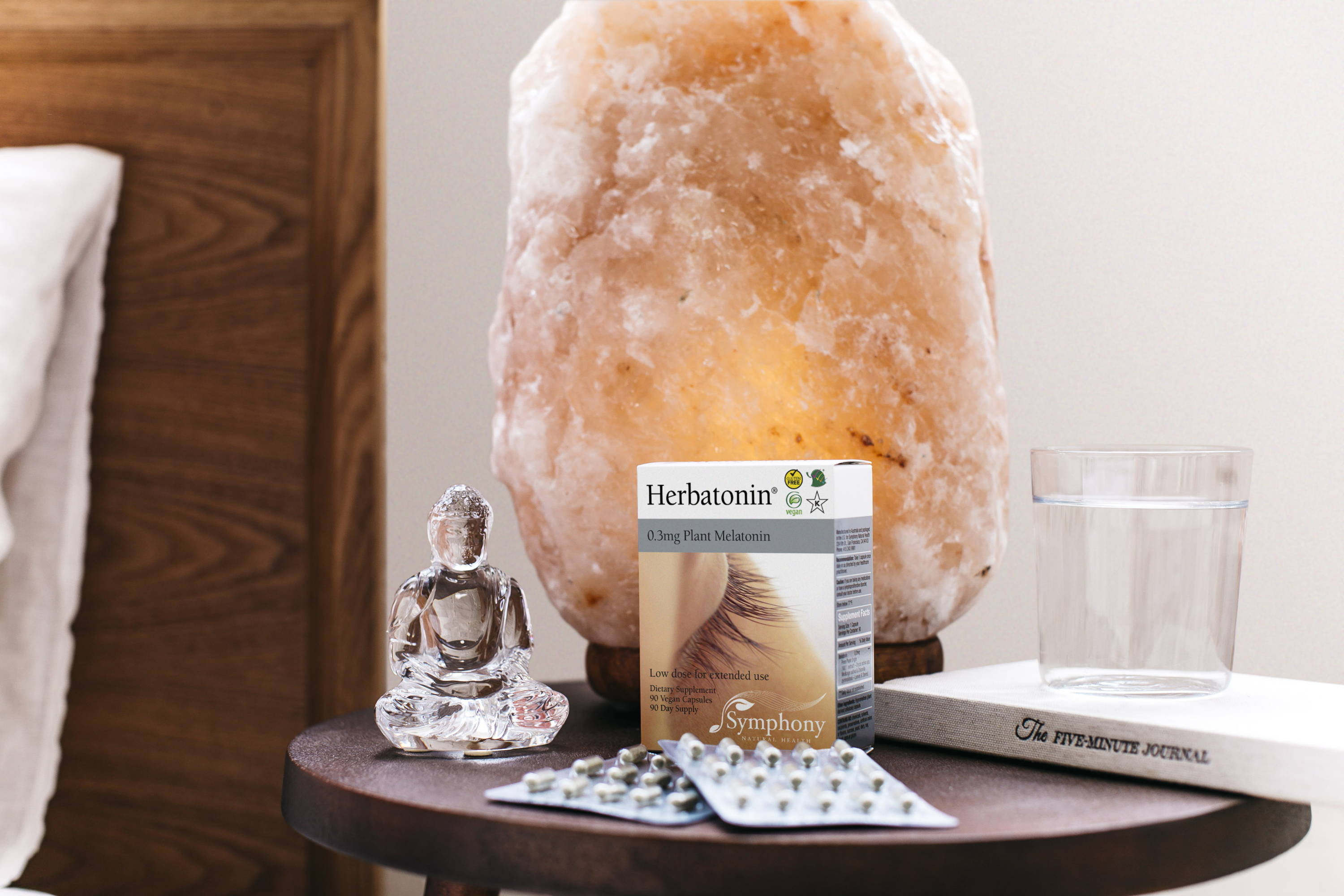 Herbatonin 0.3mg is the only plant-based melatonin in the world. It is a 100% natural plant extract from a particular variety of rice with a standardized level of 0.3mg of melatonin per capsule, safe for extended use on a nightly basis.