There are many great people whose words and thoughts shape our modern world. Renowned cellular biologist and ecologist, Barry Commoner, is one such man. His work is often said to have influenced the creation of the Environmental Protection Agency and the Clean Air Act in 1970, and he famously said the words that our company lives by:

It wasn’t so long ago that research into organic farming started to prove this very point. Not only are organic fruit and vegetables free of residual pesticides and other chemicals that can cause cancer, endocrine disruption and various other health issues, but they also contain higher levels of some vitamins, minerals and key compounds that positively impact our health – as opposed to conventionally grown crops.

This means, for example, that simply by choosing an organic orange, we can simultaneously avoid consuming all the downsides of industrial farming, while potentially providing our bodies with higher levels of vitamin C, antioxidants and other micronutrients.

This is why, as a health-conscious consumer, nature knows best soon became my ethos. It began as a philosophy, but it quickly became a rational, deliberate choice that extended from the food I ate, to the water I drank, and the supplements I took…always looking for the highest quality, most bioavailable, most natural, organic, product I could find.

And melatonin was no different.

It may surprise you to learn that 98% of all the melatonin options on the market are derived from synthetic chemicals or from animal sources. It wasn’t until 1987 that melatonin was even discovered in plants, and it was only in 2007 that the first phyto-melatonin (plant melatonin) supplement was released to the world.

That product was Herbatonin® - made from unique varieties of chlorella, alfalfa and rice. And, like all of our products, the creation of Herbatonin® is controlled from seed to shelf, using a proprietary method of sustainable farming, combined with a manufacturing process that only includes water, temperature and pressure. This results in a product where the melatonin is not extracted, but naturally contained within the cells of the plant, which means that Herbatonin® is so natural that it is just like eating the plant itself – but in far more concentrated doses.

But how does melatonin support our health?

As a hormone, melatonin has long been recognized for the vital role it plays in supporting our body’s circadian rhythms and our sleep/wake cycle, which is intrinsically connected to nearly all aspects of our health. However, this is only a part of what melatonin does in our body, because it also supports healthy inflammation and works as a powerful antioxidant, protecting our cells, DNA, and mitochondria, as well as supporting our immune system and fighting the aging process.*

Antioxidants: What they are and why they’re so important.

Antioxidants can be found in fruits, vegetables, nuts, fish and meat, and they play a key role in our health by actively scavenging and fighting unstable, damaging compounds in the body known as “free radicals”. Free radicals are produced in our bodies every day. They are the natural by-product or “waste” that ensues from numerous essential chemical processes, such as metabolizing food into energy, cell repair after exercise or muscle strain, the absorption of oxygen from the air we breathe, and even the detoxification process required to eliminate toxins and chemicals from our bodies.

The “clean up” that antioxidants help our bodies perform is critical, because waste takes its toll. When too many free radicals build up it can result in chronic inflammation, cell and DNA damage, increased aging and disease, which is why it is so essential to get enough antioxidants each day through the combination of a healthy diet and well-balanced supplements.*

What makes melatonin different from other antioxidants?

Unlike most other antioxidants, or any molecule for that matter, melatonin has a unique ability to cross the blood-brain barrier.*
The blood-brain barrier is a naturally protective border that stops toxins, pathogens and many other molecules in our blood from crossing into our brain and nervous system. The challenge is that this border is so protective that it doesn’t just stop harmful molecules from entering our brain and nervous system, it also blocks beneficial molecules as well.

But melatonin is unique. It is able to cross the blood-brain barrier because it is soluble in both water and lipids (fat), which enables it to freely pass the barrier and flow through all of the body’s tissues and vital organs.

This is a significant finding, and it is creating much excitement among scientists and the medical community, as very few molecules are able do this.
What is even more exciting is that phyto-melatonin (Herbatonin®) appears to have an even greater impact as an antioxidant than synthetic melatonin. Recent research out of the Medical University of Lublin, in Europe, compared a number of sources of synthetic melatonin with plant melatonin (Herbatonin®), looking at free radical scavenging potential, antioxidant oxygen radical absorbance capacity (ORAC) comparisons, and key enzymes involved in immunity and inflammation, as seen in these graphs. 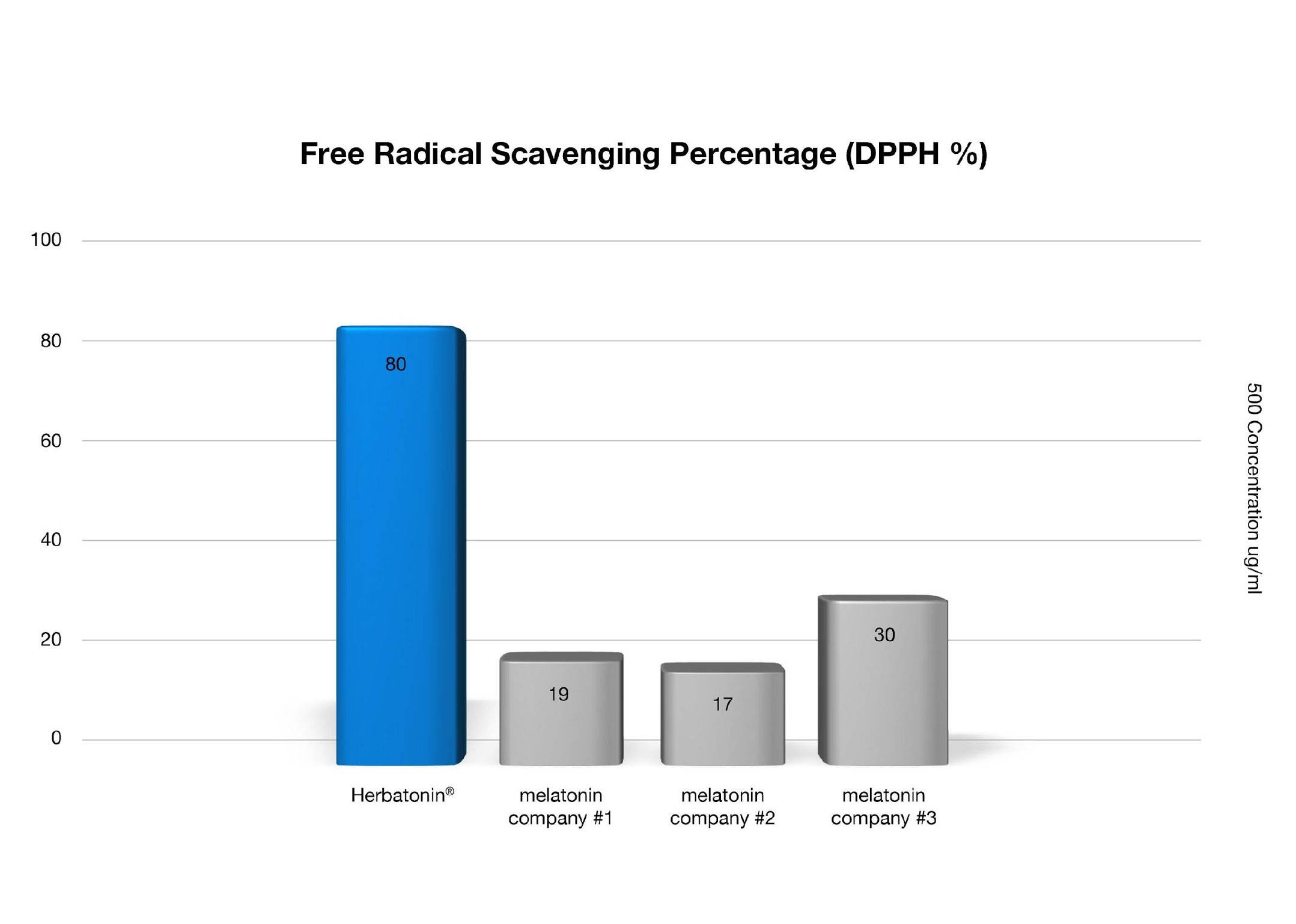 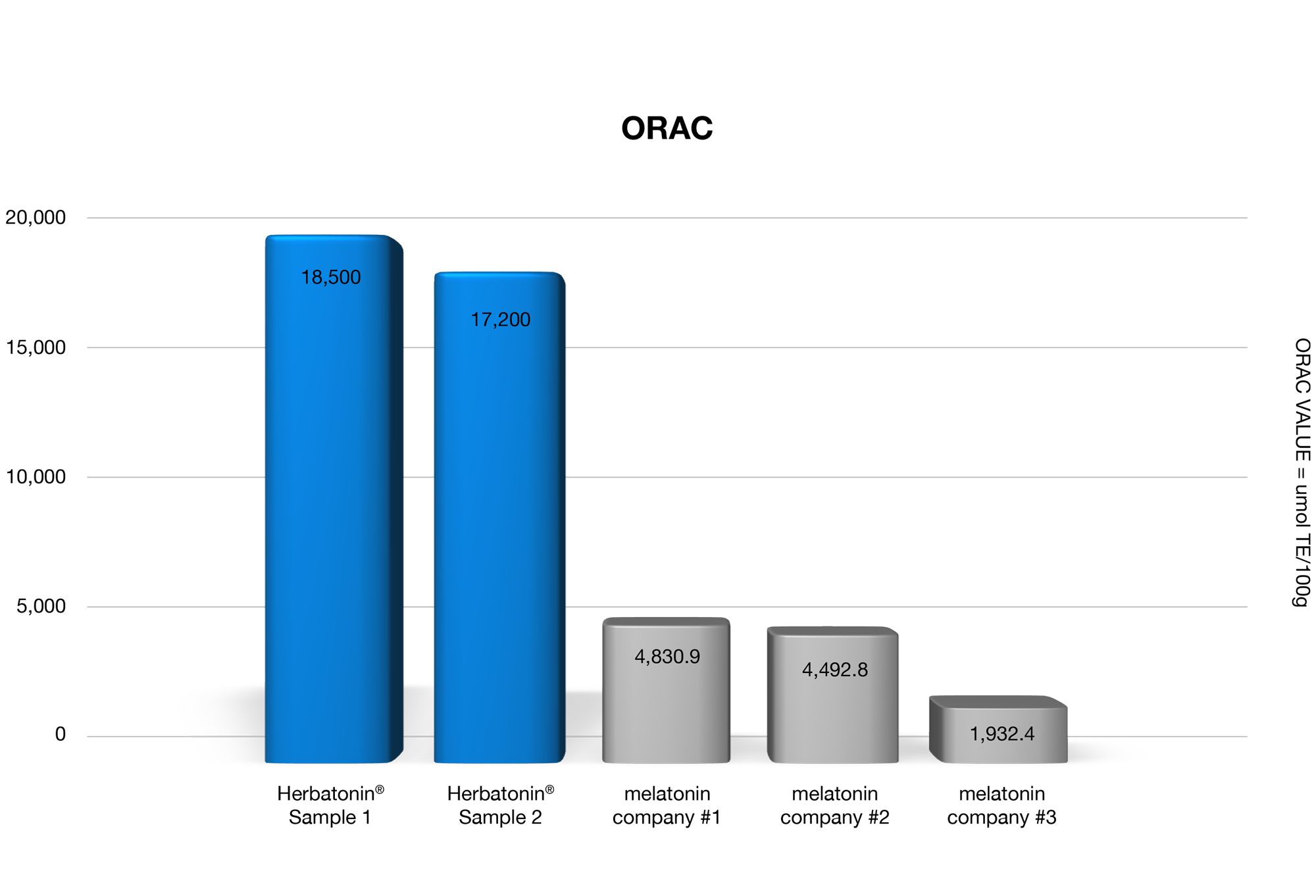 The ORAC (Oxygen Radical Absorbance Capacity) value, or “ORAC score” is a method of measuring the in vitro antioxidant capacity of different foods and supplements.

More than two decades in the making, it was originally developed by scientists working at the National Institutes of Health (NIH) and USDA. Measuring in vivo (meaning inside the human body) is not possible and for that reason, the exact relationship between the ORAC value of a food/supplement and any suspected health benefit it may have as a result is unproven. However, many scientists theorize that foods higher on the ORAC scale may be more effective at neutralizing free radicals.

The second phase of the study looked at Herbatonin® when combined with vitamin C to see if, when combined, they further enhanced the antioxidant potential.* 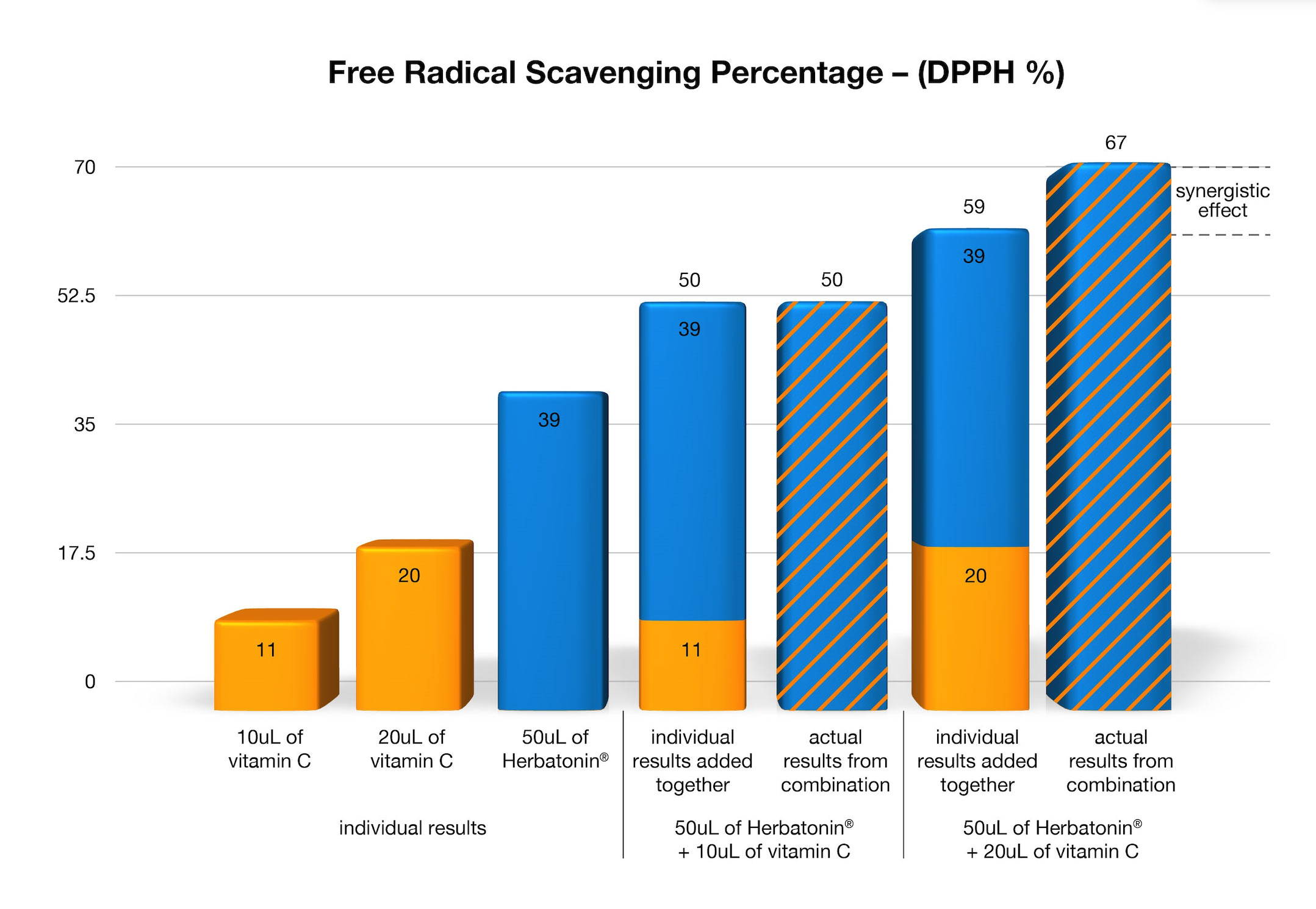 Interestingly, this effect was NOT seen when compared to common synthetic forms of melatonin and vitamin C, once again reaffirming that nature knows best.

This is only the beginning of our research but, as you can see, there are a lot of reasons to get excited about melatonin’s antioxidant properties and how Herbatonin® can take that potential to a whole new level!

To discover more of our research comparing Herbatonin and synthetic melatonin, check out our next blog which looks at inflammation and immune health. Also feel free to reach out to our reach out to our medical team with any questions or shop Herbatonin below.