You may have seen a lot of posts on social media about food, and particularly pistachios, cherries, and bananas, having high levels of melatonin. We’ve seen a number of posts claiming that you only need to “eat a few pistachios before bed to get the same amount of melatonin as a supplement”.

The truth is - you would need to eat over 5,000 pistachios to get 1mg of melatonin.

At Symphony Natural Health we are big believers in the power of plants and, as you will notice, our entire product line is vegan. What’s more, you will regularly hear our team of integrative and functional medical practitioners (which includes MDs, Naturopathic Doctors and Certified Nutritionists) quote Hippocrates’ famous line, “Let food be thy medicine and let thy medicine be food.”

However, as scientists, we feel it is imperative to get our facts and numbers correct. Because, when it comes to our health, doses, serving sizes and amounts really do matter.

For example, if you find out that you have iron deficiency anemia, is adding steak to your diet enough, or is it important to add an iron supplement to your diet to get you back into balance? Our point is, the amount we consume matters, and while we certainly believe that “food is thy medicine”, sometimes, based on where we are in our health journey, we may need higher concentrations, doses or amounts of a particular nutrient in the short-term to realign our health or get it back on track faster than we could with food alone.

Unfortunately, in the world of memes and social media, misinformation can sometimes spread like wildfire, largely because people wish it was true. As the saying goes, “a lie can travel halfway around the world before the truth can get its boots on.”

This is why we always want to set the record straight when we see science that is taken out of context, or information that is just plain wrong.

So, what does this all have to do with Melatonin? Well, while it is true that several foods naturally contain trace amounts of melatonin, science shows us that we need to consume enormous amounts of these foods just to get the natural physiological dose of melatonin that our bodies naturally produce each day, which is 0.3mg.

So, this means that while pistachios are regarded as having some of the highest levels of melatonin in any food, in order to get 0.3mg of melatonin you would need to eat over 1,500 pistachios at once!

How did the rumor come about that eating just a few pistachios before bed was like taking a melatonin supplement, you ask?

However, after the Iranian research was published, scientists around the world tried to replicate this new research using the exact same variety of pistachios, as well as many others. In fact, our own head of Research and Development, Dr. Meissner also tried to replicate the findings What he and everyone else found was that the levels of melatonin were much, much lower than stated – and again, were only detectable in the same nanogram levels as seen in all previous research on pistachios and many other plants.

This research caused such an issue in the natural products industry in Europe that the German government did their own investigation and found that the data presented in the Iranian study was incorrect, and subsequently requested that the paper be retracted.

The American Pistachio Growers even released their own research showing that the Iranian research was not accurate.

It might not surprise you to learn that Iran is the biggest producer and exporter of pistachios in the world. 😉 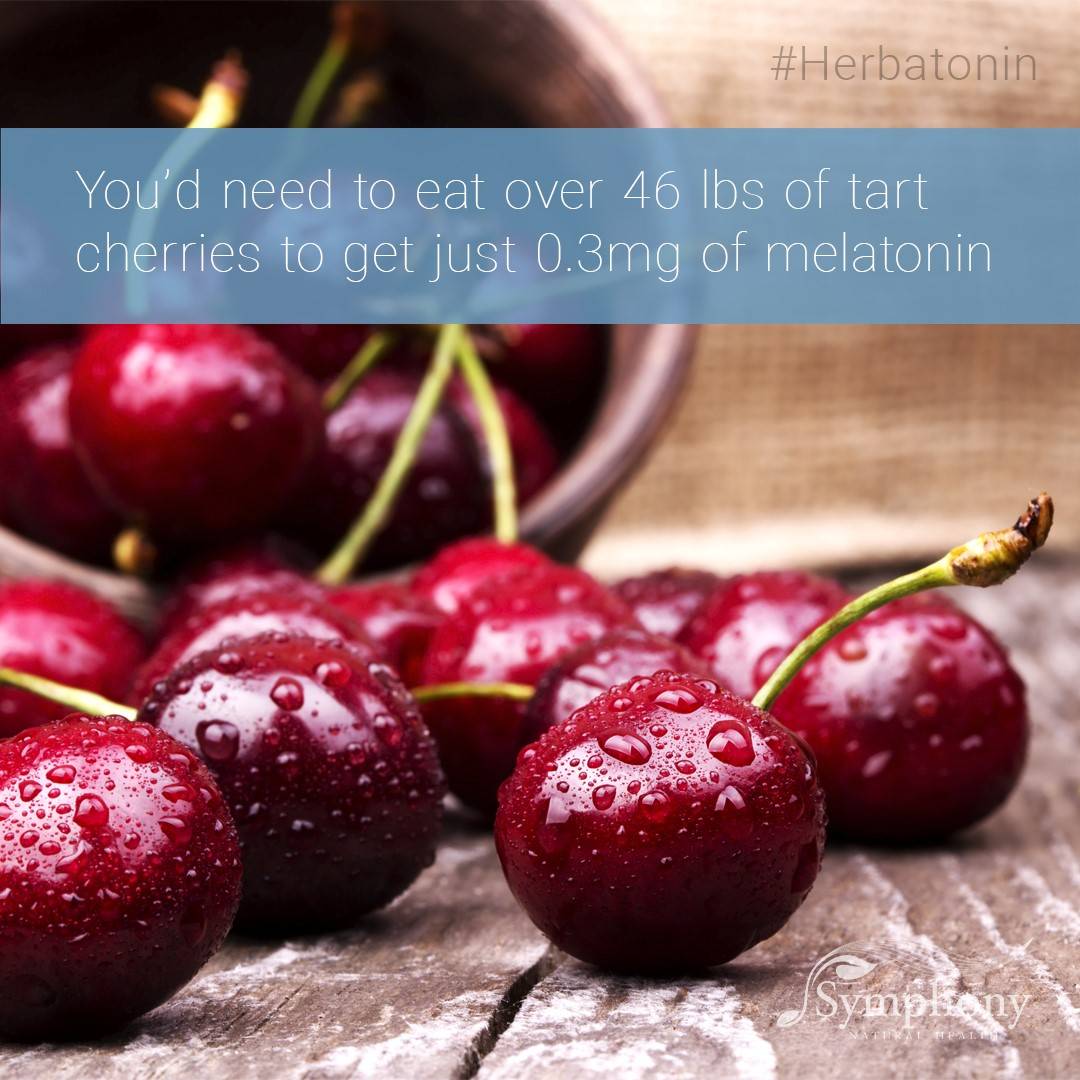 What about Cherries and Bananas?

Cherry producers have also gotten in on the conversation and will often tout Montmorency cherries as a solution for sleep. But to get 0.3mg of melatonin this way, you’d need to consume over 45lbs of Montmorency cherries – which, by the way, equates to more than 11,675 calories and nearly 1,900 grams of sugar!

It is also worth noting that this figure is based on data relating to sleep research published by the cherry producers themselves. And other researchers have since estimated that the melatonin content of these cherries is actually much lower, meaning you may need EVEN MORE cherries.

If you think that’s a lot, imagine eating 3,852 bananas for a good night’s sleep!

Don’t get us wrong, we’re all about natural, vegan sources of melatonin…

But not if it simultaneously causes other health concerns – or a very big stomachache!

The reality is that getting physiological appropriate doses of melatonin from food is extremely hard. And this goes to show just how special Herbatonin® is.

As the first phyto-melatonin (plant melatonin) product in the world, Herbatonin® is made from unique varieties of chlorella, rice and alfalfa, where the melatonin is not extracted, but naturally contained within the cells of the plant. The process we use to create Herbatonin® involves a very unique method of farming, combined with a manufacturing process that only includes water, temperature and pressure. By these means, we have created a product so natural that it is just like eating the plant itself – but in far more concentrated doses.